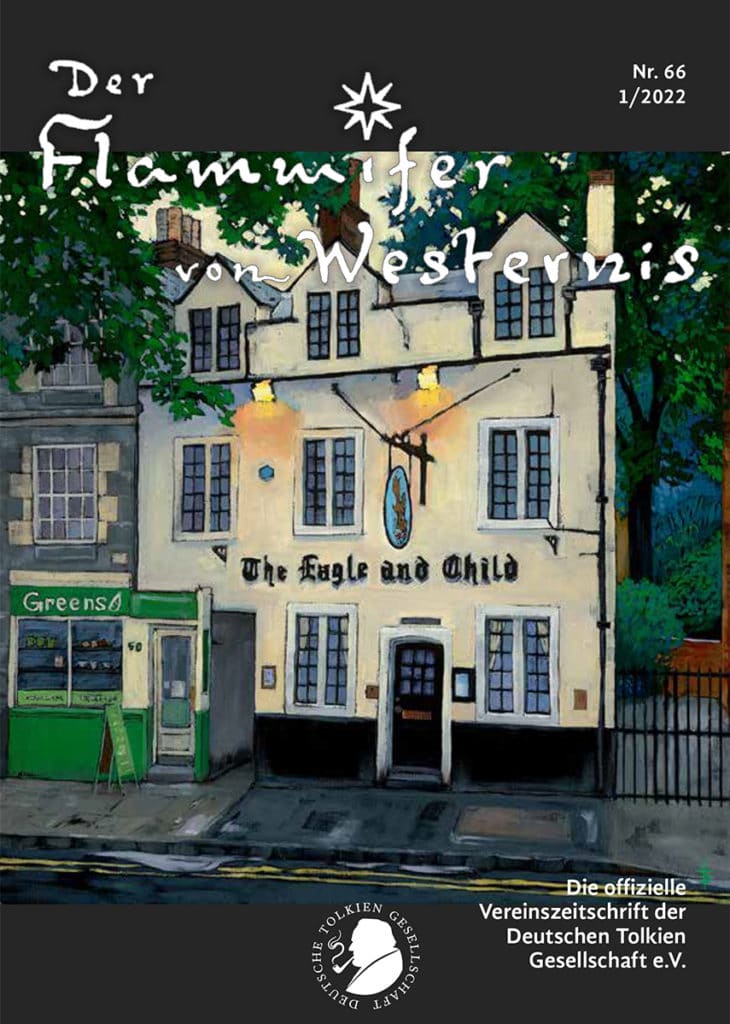 This issue’s cover features the painting “The Bird & Baby” by artist Tamsin Barlow.

In 2019, Annika Röttinger met Candian artist Ted Nasmith, one of the most famous and beloved illustrators of Tolkiens works. Ted talked about his love for Tolkien, gave an insight into his artistic process and shared his own artistic role models. Annika was also able to elicit from Ted why Lúthien Tinúviel is one of his all-time favorite characters.

Visit at the Greisinger Museum

Last year, Rita-Maria Uerz visited the world’s only Middle-earth museum for the second time – this time, in a proper Middle-earth garb. Expertly guided by founder Bernd Greisinger, the visitors experienced a round trip through Tolkiens world. Apart from pieces of art and a colourful array of figurines, the museum also displays handwritten letters of the Professor – for Rita-Maria this impressive collection is an absolute “must-see” for all fans of Middle-earth.

Against the old world: Differences of the depiction of women in Tolkiens books and Jacksons film adaptations

Erik Wendlandt analyzes the differences of the depiction of women in Tolkiens story and the film versions of Peter Jackson using Éowyn, Galadriel, Arwen and Tauriel as examples. He concludes that the characters take on a much more active and combative role in the films than in the books while still being dependent on the male characters.

The influence of the two World Wars on literature using the example of J.R.R. Tolkien’s The Lord of the Rings

In her article, Lena Fürbringer examines the influence of the two World Wars on Tolkien’s literary work. In doing so, she shows the parallels between historical events and the events in The Lord of the Rings.

In the third installment of his excursion into the world of heavy metal, Raphael Nemann dives into the sub-genre of “black metal” and introduces us to the Austrian band Summoning, whose songs are all inspired by Tolkien’s works and show direct references.

In his insightful article, Andreas Zeilinger shows that “Fake News” already existed in Middle-earth. Using the example of Morgoth and Sauron, Andreas describes how lies were deliberately spread, discord was sown and thus great damage was done.

Sophie Lemburg and Rebekka Wörner went there and back again on a quest to Middle-earth and tried out the latest game in the Exit series, Schatten über Mittelerde, by Kosmos. While Sophie praises the appealing design, her conclusion is still rather mixed – mostly because of a lack of references to the books and a quite rigid game structure that leaves little room for creativity. Rebekka, on the other hand, was thoroughly enthusiastic about the game and was even able to “reycle” a fewo of the riddles at her Smial.

Tim Scholz went on a literary journey to Switzerland and explores Tolkien’s sources of inspiration in the Alpine republic with Die Schweiz in Tolkiens Mittelerde by Dr. Martin S. Monsch. Even though some of the connections Dr. Monsch makes are rather speculative, Tim draws a positive conclusion, since the hiking suggestions and tips on places of interest serve as a wonderful inspiration for a little trip of one’s own.

Sylvia Lindner took a closer look at Das inoffizielle Kochbuch zu Tolkiens Welt by food blogger Patrick Rosenthal. Despite its appealing layout and delicious recipes, Sylvia finds that the book lacks references to Middle-earth. Thus, she finds the book to be rather superficial in terms of content and wastes a lot of potential.

Apart from the contents mentioned above, this issue of Flammifer also features a calendar of Tolkien-related events and news from the Society’s board. While Lukas Stahn reports on the small but fine Tolkien reading evening at Haven Bahrenfeld, Tobias M. Eckrich remembers the recently deceased Priscilla Tolkien in his obituary.