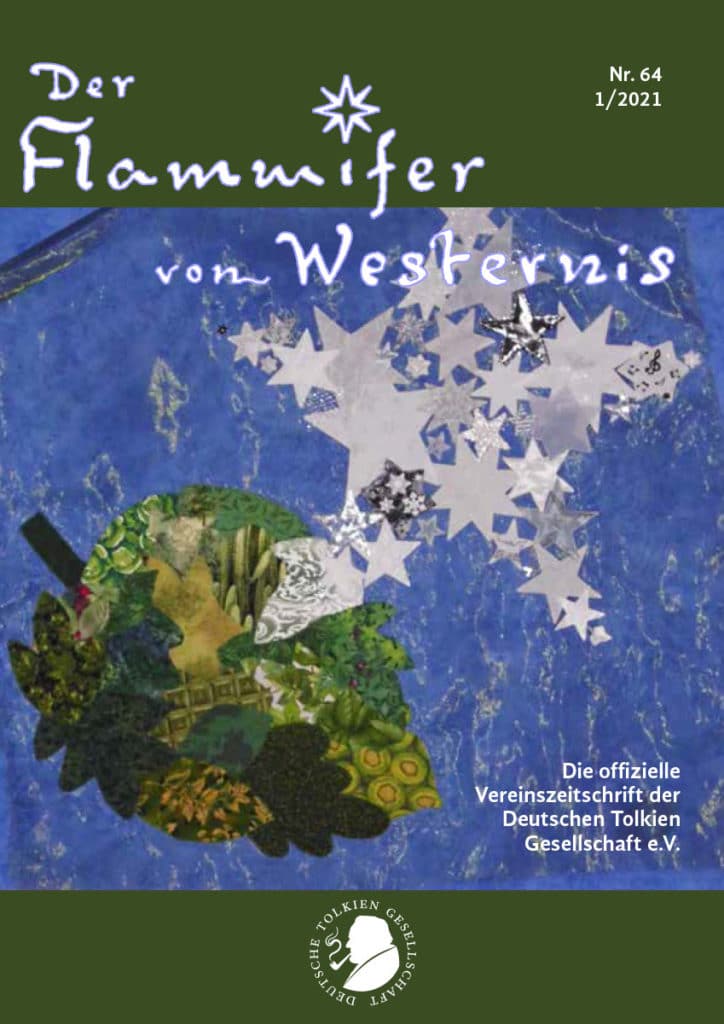 Oxonmoot 2020
David Stechern shares his impressions of last year’s Oxonmoot, which, even though it was held in entirely digital form due to the pandemic, was packed to the rim with lectures, songs, sketches and recipes. All in all, this very special gathering of the Tolkien Society was a colourful bucket of entertainment that allowed people from all over the world to celebrate the professor.

“Twenty-first century receptions of Tolkien” – seminar of the British Tolkien Society
Martina Heyden provides us with an overview of the topics of the seminar, which took place in February 2021. The core question all lectures revolved around was how our perception of Tolkien’s stories has changed in the 21st century. The topics ranged from the artistic approach of Alan Lee and Tomás Hijo to the adaptations by Peter Jackson to how the world of Tolkien is depicted in video games. The entire, 7-hour long program can be accessed on YouTube.

Interview with John Garth – Birmingham 2019
Annika Röttinger used the Tolkien conference in Birmingham wisely and was not only able to interview Christina Scull and Wayne G. Hammond (see Flammifer No. 63), she also sat down with John Garth. Apart from John’s book projects past and present, they also talked about the Tolkien biopic and the upcoming series produced by Amazon. The entire interview is available in episode 33 of the TolkCast.

Visiting Rohan
In yet another instalment of her popular series, Claudia Pertschy pays a visit to Rohan and the Rohirrim. The wide and wild countryside with its rolling grasslands inspired Claudia to fruity and cereal-based recipes that give us a wonderful taste of the Riddermark.

Tengwar Latinwe
Helmut W. Pesch elaborates on how Tolkien used the Elvish Tengwar to write down Latin texts and gives us an insight into the professor’s linguistic approach.

Hesiods Theogony and J.R.R. Tolkien’s Creation Myth – tracing the myth of Prometheus in The Silmarillion
Miriam Brost analyzes which parallels can be drawn between the creation myths of Hesiod and Tolkien and whether their respective “heroes” Prometheus und Fëanor share similar characteristics.

Tolkien and Heavy Metal – part 2
Raphael Nemann takes us back to the hard rock era of the 70s where bands such as Led Zeppelin or Black Sabbath regularly used references to Tolkien’s works in their songs, many of which are considered classics of rock music today.

LotR TCG Online – the game of cards that keeps on going
Jay Kay gives us an insight into the rules of the complex Lord of the Rings Trading Card Game and explains how it became one of the longest lasting card games of the “Tolkienverse”.

Reviews
Christian Weichmann dives into The Worlds of J.R.R. Tolkien – John Garth’s literary journey to places that have inspired Tolkien. Even though Garth’s arguments aren’t always entirely convincing and historically accurate, the countless pictures and illustrations still make reading the book worthwhile and may serve as a source of inspiration for a little post-pandemic Tolkienesque journey.

After reading Die Gewandung der Halblinge by Carola Adler and trying out some of the sewing instructions, Martina Heyden discovered some serious discrepancies between appearance and reality. Even though she wasn’t able to create the hobbity outfit she had hoped for, she was at least inspired her to create lovely accessories for fashion-conscious halflings (and herself, of course).

Miscellaneous
Apart from the contents mentioned above, this issue of Flammifer also features a calendar of Tolkien-related events and news from the Society’s board. Sylvia Lindner sat down with Tobias M. Eckrich and talked about how the DTG took over Ardapedia and what it took to have everything up and running. Christian Weichmann takes a closer look at the movie Tolkien and analyzes fiction and fact in the filmic portrayal of Tolkien’s biography. Tim Scholz invites us to a round of The Hobbit – An unexpected Party, a new board game created by Weta Workshop, while Denis Meisner aka Ungolcondir shows us where Hobbits are barbecued.

Christian Weichmann embarks on a journey through the snares of German grammar and debates whether the river Nimrodel should have a male or female article. Rebekka Wörner shares her thoughts on the ever elusive Celeborn and Holger Leuz makes an entirely unexpected discovery of new stories from Middle-earth.