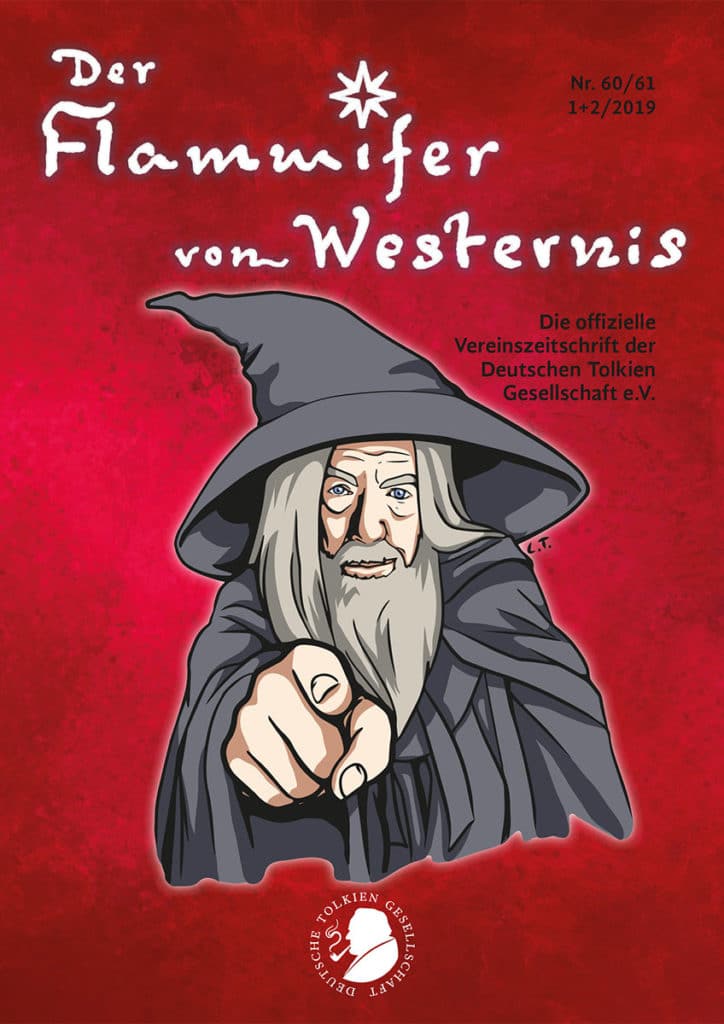 Letters from Father Christmas – Tolkien enchants second graders
Lisa Stolze recaps rea- ding the Father Christmas Letters to her pupils and how the adventures of Polar Bear and Company have turned skeptic second-gra- ders to avid readers of Tolkien’s Christmas-y collection of letters from the North Pole.

Unexpected presents – the Berlin Smial at the Phantastika
Kathrin Mok reports from the Phantastika, which took place in October 2018 as part of the German Comic Con. Although there were a few obstacles, it turned out to be a successful weekend for everyone, including a lovely meeting with “Pippin” Billy Boyd and two bottles of a sticky soft drink, one of which now carries the legendary question “It comes in pints?”

The Lord of the Rings at the Deutsches Musikfest in Osnabrück
Harry Hoppe was able to attend the German pre- miere of composer Johan de Meij’s 5th Symphony, which was inspired by Tolkien’s works. Within the framework of the Deutsches Musikfest, a Lord of the Rings Night took place, where both of de Meij’s Tolkienesque symphonies were performed by an orchestra and choir.

“The same procedure as every year- or is it?” – The Tolkien Thing in Lützensömmern
Kathrin Mok reports from a colorful Thing (her sixth in a row), which took place in a manor in Thuringia. Apart from culinary workshops (cooking like a hobbit and tasting Scottish whisky), the pro- gramme also included several lectures (one of them with guest of honor Tom Shippey) and the classics, such as archery and the Middle-earth Jeopardy.

Tolkien Day Geldern
Carola Oberbeck recaps her first ever Tolkien Day. She was one of around 8.000 visitors who were able to travel to Rohan, Esgaroth, the Shire, and the realms of the Elves all within walking distance. One could also get in touch with the inhabitants of Middle-earth. Thankfully, Ents, spiders, Nazgûl, Orcs and Rangers were always close at hand and, apart from occasional fighting, happy to chat or take an obligatory selfie. Of course, the Tolkien Day also featured several informa- tive lectures, music and the popular competition for the best costume.

Tolkien 2019 – I have a klatch today!
Carola Oberbeck attended the conference Tolkien 2019 in Birmingham and shares her impressions. More than 100 programme items featured a wide range of lectures with topics such as Towers in Tolkien, similarities between Bilbo and Odysseus or the meaning of water in the professor’s works. Carola also praises the “Coffee Klatches”, an informal get- together with the lecturers and the evening entertain- ment, which featured Leaf by Niggle as a play and “Just a Minute in Middle-earth”.

„Tolkien – Voyage en Terre du Milieu” – an extraor- dinary exhibition
Annika Röttinger participated in the exhibition opening in the Bibliothèque Nationale de France (BnF) in Paris. Until February 2020, around 350 exhi- bits will be displayed on 1.000 m2, making it the most extensive of the three versions of the Tolkien exhibiti- on. One of the highlights are undoubtedly the hand- woven tapestries displaying motifs of Tolkien’s creati- on and manuscript pages that are in private property of the Tolkien family. It is hardly surprising that Annika highlights the importance of the exhibits that have been provided from the personal property of Christopher Tolkien and his family and have in part never been shown in public before. The first exhibiti- on in the French National Library that focuses on an author who is not French takes the visitors on a jour- ney through Middle-earth. However, in contrast to the two previous exhibitions, the focus is set on the work rather than the author. Apart from exhibits that were previously displayed in Oxford and New York, the BnF has added several “non-Tolkienesque” objects from their own inventory to highlight the sources from which Tolkien drew his inspiration.

Reviews
Rebekka Wörner reviews The Lay or Aotrou and Itroun, a collection of some of the lesser known poems by Tolkien, which were heavily influenced by Celtic mythology. Annika Röttinger got her hands on The Writers Map by Huw Lewis-Jones and found it to be a comprehensive atlas of all the journeys famous wri- ters took in their imagination. Apart from six maps related to Tolkien’s works, the book also features maps from Narnia or the Harry Potter universe, but also the Mappa Mundi or the London travel guide A-Z. The compilation with articles by 24 authors compares real world maps with fictional maps and introduces readers to the art of map-making.

Elvish colonialism
Rebekka Wörner takes a closer look at colonialism among the Elves of the First Age of Middle-earth and analyzes how the cultural and social structures of the individual groups of the Quendi were changed over the course of the centuries.

J.R.R. Tolkien, G.R.R. Martin and what connects them apart from the R.R.
Sophie Bauer and Maria Zielenbach compare two of the most popular and influential fantasy authors of our time. Part one of two deals with the similarities and differences in the literary style. Sophie and Maria compare the style of writing, the conception of each sub-creation, the plot, the depiction of the characters and their development as well as the influence of Tolkien and Martin on modern fantasy.

J.R.R. Tolkien and George R.R. Martin – a comparison
Tolkien expert Tom Shippey compares the Professor with George R.R. Martin and uncovers similarities between the stories and their characters – some of them obvious, some hidden. To illustrate the differen-
ces of the works, Shippey comes up with a range of bold theses which he then tackles with a critical approach and invites the reader to do the same.

“I play the real wizard” – impressions of Ian McKellen’s stage show
Anke Eißmann went to see Ian McKellen’s One- Man-Show in London and heard many funny and moving anecdotes from his eventful life and how it came to pass that he turned into one of the most famous wizards of cinema history.

Miscellaneous
Apart from the contents mentioned above, this issue of Flammifer also features a calendar of Tolkien- related events as well as Sylvia Lindner’s report from the 5th anniversary of the Tolkien Reading Day in Oldenburg. Furthermore, we were able to reproduce Friedemann Mertin’s article concerning the Tolkien Thing which was published in the Thüringer Allgemeine. Sarah Hirschmüller introduces Fellow-ship e.V., a group of 20 people who put long weeks of work into building the Rohan camp on the Tolkien Day from scratch. Apart from that, Carola Oberbeck takes us along as she follows Tolkien’s footsteps in Birmingham and Oxford.

Sylvia Lindner provides us with an in-depth review of the structure and rules of the app-based board game The Lord of the Rings: Journey in Middle-earth and lets us know, whether it is fun and thrills for Tolkien fans. In her article, Christiane Steinwascher elaborates on how a Silmarillion-inspired opera cycle by Welsh com- poser Paul Corfield Godfrey was finally put into music by a group of dedicated musicians.

This Flammifer also features Jan Böhm’s and Kathrin Mok’s very own Tolkienesque rendition of Goethe’s “The Sorcerer’s Apprentice”. We furthermo- re get to read Uli Hackes interpretation of the Scouring of the Shire and the Battle of Bywater and find how he translates the ongoings in the Shire to our society.