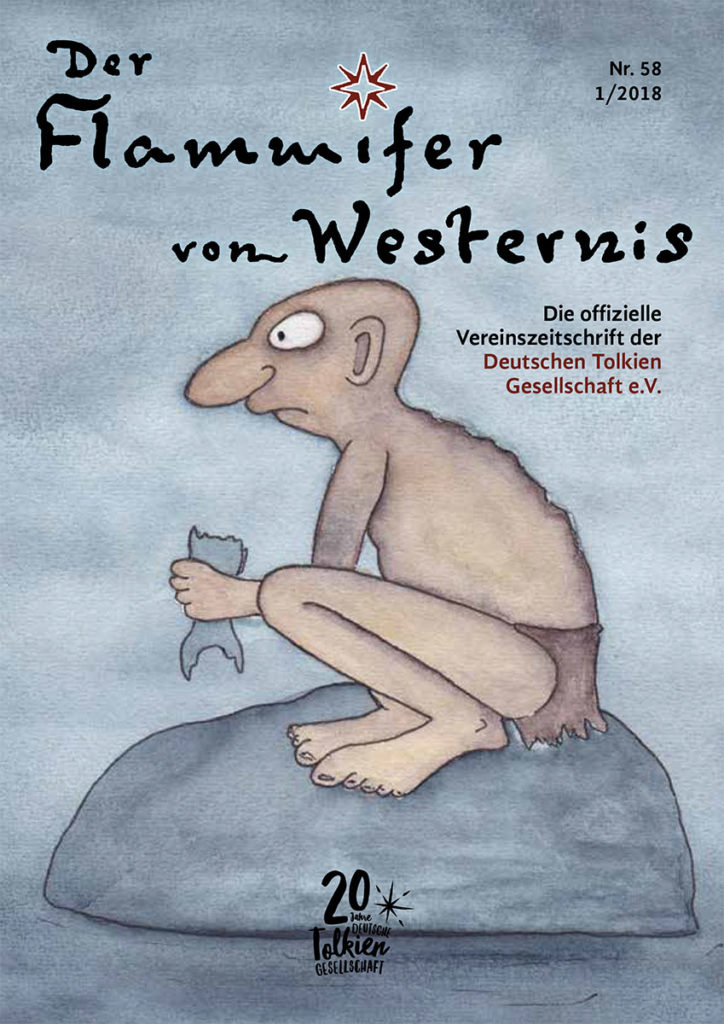 Tolkien Day 2018
Kerstin Hacke reports from this year’s Tolkien Day, which marked the 10th anniversary of the event in Geldern. Since it is also the 20th anniversary of the DTG, there was much cause for celebration. The programme was not only appropriately packed with all kinds of culinary treats and a wide range of lectures, many artists and merchants also showcased a colourful potpourri of beautiful and extraordinary things. A novelty of this year’s Tolkien Day was the screening of “The Fellowship of the Ring” in the specially set
up open-air cinema. The highlight of this very hot weekend in May was without any doubt the concert of the Tolkien Ensemble on Saturday (their only German concert in 2018).

Tolkien in Staffordshire
David Robbie, the project manager of the exhibition J.R.R. Tolkien in Staffordshire 1915-1918, provides us with some insight into the development and set-up of the travelling exhibition, which was opened in March 2016. Apart from drawings by Tolkien, the exhibition also features the model of a signal officer of the Lancashire Fusiliers and a model of the Cottage of Lost Play. In his article, David also goes into more detail on how his stay in Staffordshire inspired Tolkien and how these inspirations would later become
intricate parts of his Middle-earth mythology. During his deployment in Staffordshire, Tolkien not only created several poems, such as Kortirion Among the Trees, he also wrote the first drafts of what would later become The Book of Lost Tales and The Cottage of Lost Play.

Spaceships in our bellies – an interview with the bookshop Otherland
Kathrin Mok and Jan Böhm of the Berlin Smial sat down with Simon Weinert of Otherland, a bookshop for fantasy and SF-literature in Berlin. In their interview Simon, Kathrin and Jan not only talk about the development of the store but also the significance of Tolkien, both for the shop and for the owners personally.

A story about life and death – or: how to explain the effect of the Lord of the Rings
In his essay, Dietmar Krah explores the in-depth effect of The Lord of the Rings and contemplates on why the story divides readers and viewers in such a profound way. Dietmar finds the story of Frodo and the Ring to be a life’s journey, starting from an innocent childhood (the Shire) up to the “end of all things” (Mordor). In Dietmar’s view, The Lord of the Rings is also a story of death, having several references to near-death experiences as well as a wide range of ghosts and ghouls.

Another stay in Rivendell
Claudia Pertschy once more takes us to Rivendell, “the Last Homely House East of the Sea”. Apart from a little more insight into the architectural structure of Elrond’s home, Claudia once more provides us with a few fine recipes, which draw their inspiration from the Viennese cuisine.

Reviews
Annika Röttinger shares her thoughts on Tolkien’s version of The story of Kullervo, which is now also available in German. Kullervo is part of the Finnish national epic Kalevala and follows the eponymous hero, whose tragic fate sends him on a path of revenge and death. The story of Kullervo was a life-long source of inspiration and fascination for Tolkien and is considered to be the model for one of his darkest and most tragic characters: Túrin Turambar. Apart from the (unfortunately) unfinished story, the book also contains an extensive amount of additional material, such as Tolkien’s lecture on the Kalevala as well as articles and commentaries by Tolkien expert Verlyn Flieger.
In the second review, Holger Marks introduces us to the story collection Märchen von den Hügeln by Waldtraut Lewin and Miriam Margraf. The book, which was published in 1986 by the children’s book publishing house of the GDR, exhibits remarkable allusions to Tolkien’s works, going as far as directly quoting parts of The Lord of the Rings.

Miscellaneous
Apart from the contents mentioned above, this issue of Flammifer also features a calendar of Tolkien-related events, news from the Society and an update on the anniversary chronicle. In his article on “The lands where giants are walking”, Christian Weichmann delves into the reallife geography of Tolkien’s works, most notably Farmer Giles of Ham.