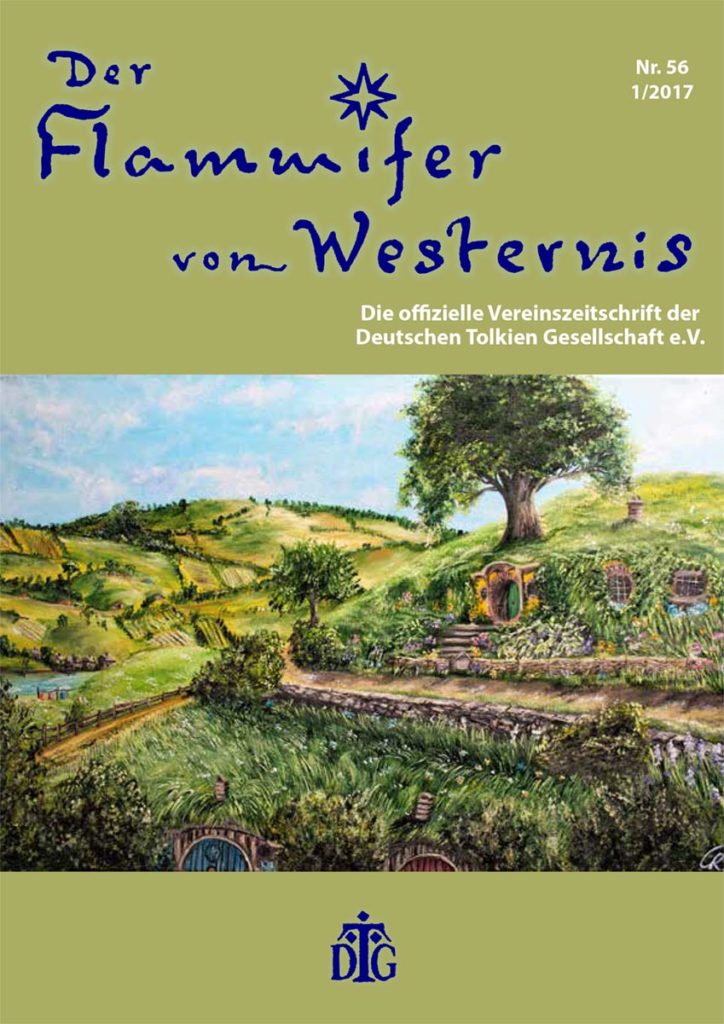 Cover artist
This issue of Flammifer features the painting “Hobbiton” by Raffaela Cech.

125 years of Tolkien
On the Professor’s 125th birthday on January 3, 2017, Rowanfair penned a heartfelt note on how Tolkien and his works have influenced generations of readers and artists and how the timeless beauty of his creations will continue to enrich our lives.

Interview on Beren and Lúthien
On occasion of the upcoming release of Beren and Lúthien, Annika Röttinger sat down with illustrator Alan Lee, editor Stephan Askani and translator Helmut W. Pesch to find out what news we can expect from the story that was probably closest to Professor Tolkien’s heart.

Introduction to Other Minds
Thomas Morwinsky introduces us to past and present of Other Minds, an online magazine that unites role players and Middle-earth enthusiasts under one roof. The main objective of the magazine is to give a platform to contributions containing information on role play and/or Middle-earth and to make them available to a broader audience. And the best thing about it: anyone can join and enrich the discourse with their own opinion.

Fantastic Worlds in Wetzlar
Marie-Noëlle Biemer reports from the meeting of smial Filig’rain, in which the members were whisked away to the magical world of the Fantastic Library in Wetzlar. With more than 280.000 books, ranging from fantasy to SciFi, horror to fairy-tales, legends to adventure novels, and secondary literature to dime novels, the Fantastic Library is a reader’s dream come true.

Hobbit Days on Veste Otzberg
Sophie Bauer reports from the very hot Hobbit Days, which took place on August 28 and 29, 2016. Even though some of the plans could not be realized due to the heat, the colorful programme of lectures, readings, a role play session, a Tolkien-Quiz and a broad range of artistry from the LARP group did not fail to entertain the guests.

They’re taking the hobbits to Oxonmoot!
Sophie Bauer takes us on a trip to Oxford and shares experiences of her first Oxonmoot. In the footsteps of the Professor, Sophie visited iconic places such as the “Bird and Baby” and the Bodleian Library and paid her respects at the traditional Enyalië. Several workshops and lectures, a play based on Leaf by Niggle and the meeting of old acquaintances and the making of new friends made Sophie’s visit in Tolkien’s hometown a very memorable experience.

The symposium “The Inklings and the First World War”
Maria Fleischhack reports from the joint symposium of the Inklings Society and the DTG, in which different aspects of war and violence in the works of Tolkien and C.S. Lewis were presented and which analyzed how the author’s experiences in the First World War influenced their artistic endeavors.

Reviews
Sophie Bauer reviewed the second German version of the iconic Letters from Father Christmas and considers it a beautiful addition to any Tolkien collection. As a special highlight, this edition includes photographs of each original letter next to the translation so that readers may marvel at the beautiful illustrations and rich decorations Tolkien created for his children.
The second review, also by Sophie, addresses a new edition of The Lord of the Rings, which was published by Klett-Cotta on occasion of Professor Tolkien’s 125th birthday. Richly illustrated with 50 beautiful paintings by Alan Lee, this edition of The Lord of the Rings is a must-have for both collectors and readers.
In the third review, Thomas Ortmann introduces us to Fire Emblem Fates, a beautifully designed and challenging strategy game by Nintendo for the young and young at heart.

Project management in The Hobbit from the perspective of Gandalf the Grey – Part 2
In the second instalment of his discourse on project management in The Hobbit, Christoph Ortmann has Gandalf the Grey take us through execution and conclusion of Project “Erebor”. Even though most of the defined goals (kill Smaug, reclaim the kingdom of Erebor) could be achieved (mostly due to the excellent work of the master burglar), Gandalf ’s overall assessment of the success of Project “Erebor” is still rather mixed, since certain deficiencies in his execution of the project led to a fair amount of unpleasant experiences.

With the orchestra in Middle-earth – Paul Corfield Godfrey
Heidi Steimel introduces us to British composer Paul Corfield Godfrey, whose Tolkien-inspired works she very much recommends. In addition, she reviewed a new musical collection of Godfrey, which presents his Tolkienesque pieces in vibrant new renditions, which take us on a unique journey through Middle-earth.

Miscellaneous
Apart from the contents mentioned above, this issue of Flammifer also contains a calendar of Tolkien-related events as well as a report on the both cosy and productive Brainstorming Weekend in November 2016 by Maria Zielenbach. Also included is a report from the reading of Friedhelm Schneidewind on occasion of the reissue of his book Das neue große Tolkien-Lexikon. Last but not least, this issue contains the laudation by Tobias M. Eckrich on occasion of the presentation of the award Der Schwäbische Lindwurm to beloved Tolkien artist Alan Lee.