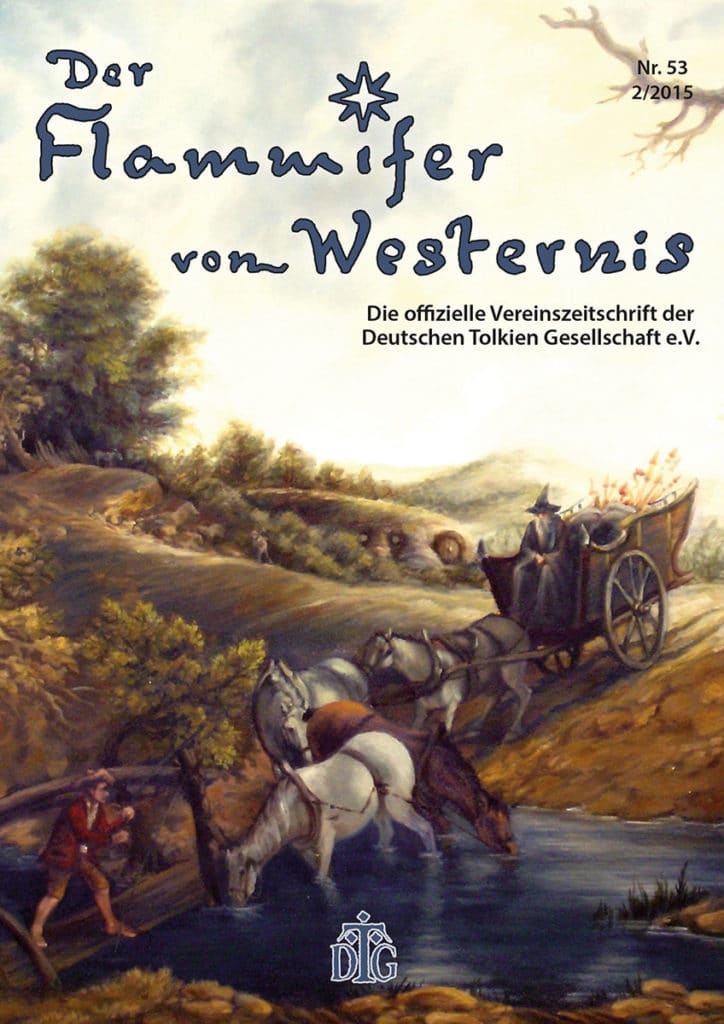 In Tolkien’s footsteps
through the Vogelsberg Marie-Noëlle Biemer introduces us to the smial at the Vogelsberg, who make a virtue out of necessity by offering Tolkien-themed day trips through the countryside. Thus, likeminded people have the opportunity to indulge in their enthusiasm for Tolkien without having to mind the disadvantages of the rural setting.

Hobbits and Elves at the Waldbühne
Steffanie Reimann gives us an insight into the “world’s biggest Ring spectacle” which took place on 23rd August in Berlin. And even though there were certainly several points of criticism, Steffanie left with a predominantly positive conclusion. Be it extravagantly equipped dwarves, elves and orcs or the musical contributions by the Tolkien Ensemble – this event certainly was a highlight for every Tolkien enthusiast.

Elijah Wood DJing in Berlin
On her journeys as a reporter for the DTG, Steffanie also witnessed Elijah Wood’s DJing skills. Alongside his colleague Zack Cowie he put on some music and made the crowd dance along to the tunes of Wooden Wisdom.

Tolkien Thing 2015
Sylvia Lindner reports from this year’s Thing, which was the last one on castle Breuberg. Four days filled with workshops, lectures, music, old and new friends and good food made the time fly and were a worthy farewell to the castle walls.

Tolkien Day in Pont
Christoph Ortmann recounts his memories from this year‘s Tolkien Day, where Pont was turned into the “Tolkien capital” for two days. The seventh installment of the annual event was well received by nearly 2.700 visitors who were presented with a colorful mixture of lectures, workshops, concerts, and several exhibitions.

Religion in Tolkien’s world
Once again, Andreas Zeilinger introduces us to new aspects of Tolkien’s creation. This time, he takes a closer look at religion in the Professor’s cosmos. Even though Tolkien’s works seem to lack a specific form of religion at first sight, on second thoughts they show significant religious influences. Thus we find a very obvious Christian touch in the “Ainulindale”, the Creation myth of the Silmarillion, which presents us with an omniscient deity in the form of Eru Ilúvatar. He creates the Ainur (some of whom will later be known as the Valar) who form the Pantheon and create Arda. On the one hand, the Professor quite obviously drew his inspiration from his own Catholic belief. For example, there are obvious parallels between Melkor and Lucifer. On the other hand, there are also echoes of heathen mythologies. Manwe, who shares character traits with both Odin and Zeus, is an excellent example for this statement.

Old English Words in Middle-earth
Oliver Traxel introduces us to the influences of Anglo-Saxon in Tolkien’s creation, which is particularly evident in the naming of certain characters and is specifically used in the characterization of the peoples of Rohan.

Arthur, Gudrun and the bee-wolf in Maldon
In his article, Christian Weichmann finds an entirely new approach to Tolkien’s works and shows that some of the Professor’s creations may well be regarded as a quite sophisticated form of fan fiction.

Review
Sylvia Lindner reviews Bilbo’s Last Song which contains Bilbo’s last poem before he leaves for Valinor and has been illustrated by Pauline Baynes. Even though the book mainly contains pictures, Sylvia still recommends it as a nice little trinket for Tolkien enthusiasts.

Miscellaneous
Apart from the contents mentioned above this issue of Flammifer also contains a calendar of Tolkien-related events, a short introduction of the smial in Leipzig as well as the introduction of the new smial competition “Heldenreise”. Furthermore, you’ll find a report from last year’s very successful Tolkien Day in Hannover.  Additionally you’ll also find two book recommendations. And last, but not least, Tobias M. Eckrich says his final goodbyes to the unforgettable Sir Christopher Lee.