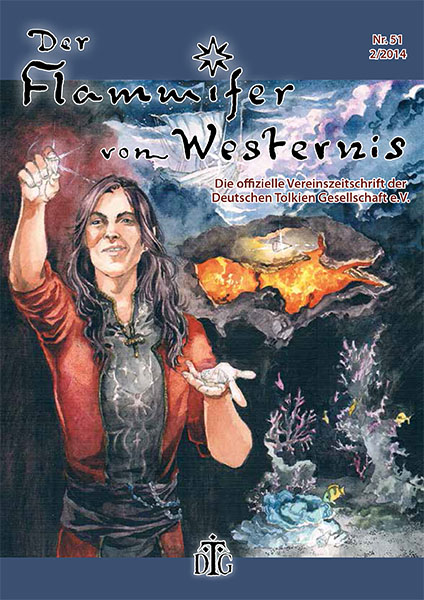 Tolkien Thing 2014
Carola Oberbeck reports from this year’s Thing, which took place in July. Apart from the obligatory annual general meeting, the programme was packed with various lectures, workshops and, of course, the famous Long-expected Party. The visit of author John Garth completed this remarkable weekend of entertainment.

To infinite horizons – Introduction of “Myth & Magic“
In yet another instalment of the series “Middle-earth is everywhere” author Mick Ennis introduces us to the Tolkien group “Myth & Magic” from Ironville. In the five years that have passed since the group’s establishment, its members changed from an informal gathering of interested students to avid researchers of the Tolkienian Legendarium, who share their expertise at conferences all around the world. Their main aim is to encourage and promote academic efforts and the love for writing.

News from the West – Two years of “Eithel Annûn”
Anja Menon gives us an insight into the origins of the Smial in Aachen. Although it being a comparatively young group of Tolkien enthusiasts (Est. in 2012), its members can already look back on some remarkable achievements, such as the hosting of the Tolkien Seminar in 2013.

Tim’s precious – a collector’s adventure
In this article, Tim Scholz gives us his account of how he came to be the proud owner of one of the largest, if not the largest Tolkien-related collection at least in Germany. Over the period of 10 years, with a lot of patience, money and a nearly Gollumesque desire to own them, Tim has managed to gather an impressive amount of memorabilia.

Tolkien Day on the Lower Rhine
Christoph Ortmann, Jörg Heininger and Sebastian Kleinen remember a remarkable weekend in June which not only ended up with some truly jaw-dropping numbers on time and food consumption as well as a new attendance record, but serves as a testimony to how proper team work can create something genuinly exceptional.

Interview with “Faelend”
Sylvia Lindner sat down Mo Stienen, singer of the music group “Faelend”, who gives us an insight into the band’s creative process all the way from the first inspirational steps to the finished song. She also talks about the challenges of writing songs in Elvish and reveals some of the band’s future plans and projects.

Carpe diem – an interview with Royd Tolkien
Marie-Noëlle Biemer met with Professor Tolkien’s great-grandson Royd Tolkien who recaptures his time on set of “The Lord of the Rings” and “The Hobbit”. He reveals on how it feels like to live with his great-grandfather’s legacy and how his brother’s battle with ALS has made him face his fears and appreciate the beauty of life.

The stewards of Gondor – more than just gapfillers – Part 2
In the second instalment of his examination of Gondor’s stewards, Andreas Zeilinger takes a closer look at the life of the last Ruling Steward, Denethor II. and uncovers the differences of his portrayal in the books and in Peter Jackson’s adaptation. What follows is his assessment of the steward’s position after the return of the king. Andreas comes to the conclusion that the stewards during their almost 1.000-years of ruling have made an invaluable contribution to the preservation of the Gondorian realm.

Reviews
Steffanie Reimann reviews Tolkien’s Zauberbaum by Elmar Schenkel in which the author aims to get to the bottom oft he question why Tolkien’s works still enjoy such undiminished popularity.
J.R.R. Tolkien: The Forest and the City is a collection of lectures presented during a conference at Trinity College, Dublin. All articles deal with the concept of Middle-earth both as a landscape as well as a constructed living space. Even though she judges the overall quality of the articles rather mixed, reviewer Marie-Noëlle Biemer concludes that the anthology is worth a reading.
Last but not least is Carola Oberbeck’s review of Corey Olsen’s Exploring J.R.R. Tolkien‘s Hobbit. In his book, Olsen, who many of his students and listeners of his podcast also know as the Tolkien Professor, pays close attention to the character’s and story’s development, especially in view of Bilbo’s change from ordinary hobbit to master burglar. Carola finds Olsen’s work an easy and entertaining read that is recommendable to both Tolkien novices and old hands.

Miscellaneous
Apart from the contents mentioned above this issue of Flammifer also contains a calendar of Tolkien-related events, Shoshana’s account of the first Thing Tournament and the ideas and wishes of some of the society’s youngest members. In addition to that, Daniel Schäfer remembers an unforgettable reading of author Tommy Krappweis, while Heidi Steimel devotes the next stop on her musical journey through Middle-earth to Finnish composer Aulis Sallinen and his symphony The Dreams of Gandalf.