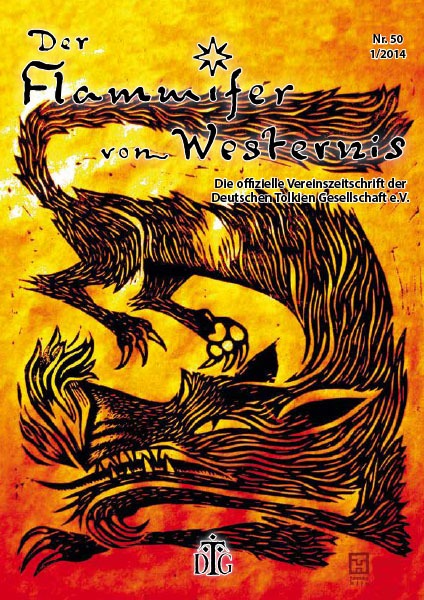 Brainstorming weekend in Tabarz
Sylvia Lindner reports from the DTG’s annual Brainstorming weekend which took place on the last weekend of January 2014. New impulses such as charity dinners organized by the smials or the intensified focus on our younger members were only a few of the ideas the creative team came up with. Apart from finding new inspirations, the work-intense weekend was also used to discuss the growing challenges for the society’s work. Final result: we need more men (and women) to actively participate in the DTG’s day to day work to keep this society out and about.

Living Landscapes – The Tolkien Seminar 2014
Carola Oberbeck gives us her account of this year’s Tolkien Seminar, which took place in Jena and focused on “Nature and Landscapes in Tolkien’s work”. The lecturers illuminated different aspects of the topic and all of them came to the same conclusion: nature and landscapes in Tolkien’s works are not just mere accommodations for our heroes and villains, but act more like an additional main character which chiefly influences the other character’s decisions and fates.

This is where Mr. Scheck is mistaken
In his elaborate letter to the editor, Martin Schwarz reflects on some of the theses Denis Scheck brought up in his interview published in Flammifer No. 47. Martin primarily disputes Scheck’s statement that Fantasy as a genre does not exist and that The Hobbit can be interpreted as a satire on capitalism.

The Lord of the Rings as a nationalistic epos? Tolkiens Anglocentric cultural image – Part 2
The second part of Annika Röttinger’s lecture focuses on the famous horses of the Rohirrim. The question that arises is whether the strong cavalry of Théoden’s people might be Tolkien’s very own therapeutic approach on the traumatic events of 1066 and the battle of Hastings, which caused the Professor’s beloved Anglo-Saxon language to be invaded by French vocabulary. Annika’s interpretation of the underlying Anglo-Saxon heritage brings us back to one of Tolkien’s key topics: Sub-Creation. By presenting us with something familiar (i.e. the Anglo-Saxon language) and putting it into a new context, Tolkien gives his readers (the English ones in particular) the opportunity for a national identification.

A stay with the woodelves
The next stop in Claudia Pertschy’s journey around Middle-earth is the Woodland Realm of king Thranduil. Mirkwood (formerly known as Greenwood the Great) is no safe place to travel through, yet it holds its very own magic (dark as it may be). Claudia introduces us to flora and fauna as well as the pointy-eared inhabitants of this extraordinary place. Her account is rounded off by mouthwatering recipes straight from the Elvish kitchens.

Middle-earth on the move
Sylvia Lindner talks to the four girls of Costume Empire whose creative decorations make the annual Thing and various other Tolkien-related events a feast for each visitor’s eyes. In this interview, they give an insight into their inspirations and and relate how much effort and hard work is needed to recreate the spirit of Middle-earth.

Reviews
Wilfried Schönfelder reviews an introductory work for all those with little time: Tolkien in 60 minutes by Michael Fuchs-Gamsböck. He finds it suitable for beginners, but way too superficial for connoisseurs of the Professor’s work. The second and third review are both related to the same work: David Day’s Book of the Hobbits. While Kerstin Köpcke considers this book a must-have for every Tolkien-fan, Christian Weichmann’s expectations were not met by Day’s richly illustrated edition.

Miscellanous
Apart from the contents mentioned above, this issue of Flammifer also contains a calendar of Tolkien-related events, Rowanfair’s account of her return to Hobbiton as well as Jens Götz’s recollection of the opening ceremony at the Greisinger museum. Furthermore we find Julian Eilmann’s account of his work with the Inda-Fellowship, a study group formed at the Inda grammar school that has brought together fifteen Tolkien enthusiasts who now go on a very rewarding and productive journey around the Professor’s works. The issue is rounded off by the artistic masterpieces of cover artist Tomás Hijo, Johanna Siebert, Sybille Benedict-Rux and our very own Anke Eißmann.