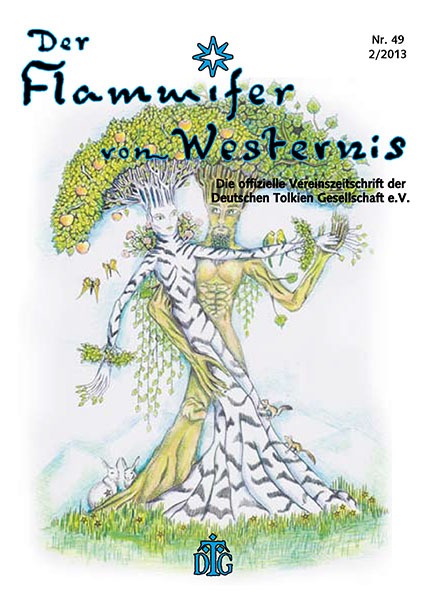 Tolkien Day at the Lower Rhine
Sebastian Kleinen and Christoph Ortmann present us with their impression of this year’s Tolkien Day. They not only witnessed the most successful Tolkien Day so far but also beheld a true feast for all senses.

Tolkien Thing
Yet another important Tolkien-related event was the Tolkien Thing in July. Carola Oberbeck recounts the memorable weekend which featured countless workshops, lectures, the annual member’s meeting, and a cheerful party which brought together old and new friends under the Professor’s wing.

A stay with the Beornings
On her journey around Middle-earth, Claudia Pertschy stops by the famous skin-changer Beorn and introduces us to the flora and fauna of Rhovanion. And of course she does not miss the opportunity to present us with Middle-earth inspired recipes that might have been enjoyed east of the Misty Mountains.

Visiting Middle-earth with the orchestra
This article marks the beginning of a new series in which Heidi Steimel introduces us to classical music inspired by the works of Professor Tolkien. The first musical piece which she looks at is the overture “The Hobbit” by Carey Blyton, which was composed in 1967.

The Lord of the Rings as a nationalistic epos? Tolkien’s Anglocentric cultural image – Part 1
In this article, Annika Röttinger dives into the world of the Rohirrim and investigates how much the historic model of the Anglo-Saxons influenced the creation of the horse-loving people. As a basis for her discussion she compares armour and weapons, the Northern Heroic Spirit and the language of the two cultures.

Jemima Catlin – Not fit for Roverandom, but for The Hobbit, says Christopher
Marie-Noëlle Biemer sat down with Jemima Catlin whose charming pictures adorn the recently published new edition of The Hobbit. In this interview, Jemima talks about her beginnings as an artist, her inspirations and how she came to illustrate Bilbo’s journey to Erebor.

Miscellanous
Apart from the contents mentioned above, this issue of Flammifer also contains a calendar of Tolkien-related events, reports from the 10th Tolkien Conference in Aachen and the Hobbit Feest in Baarlo as well as Teresa Schmitt’s account of her adventurous journey to the Lonely Brew-Mountain. Also we can feast our eyes on the Top 3 of this year’s photo competition, all of which were inspired by the topic “There and Back again.”