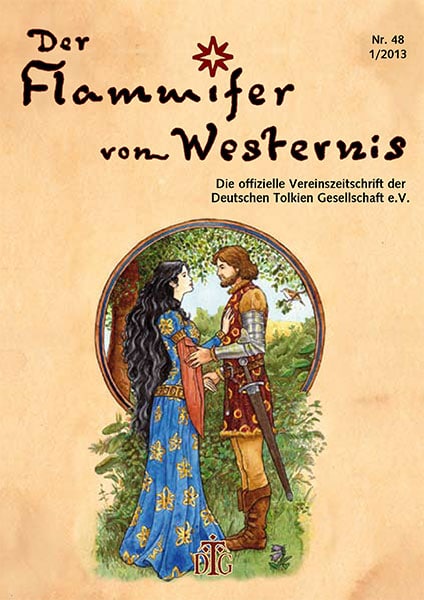 Tolkien Day 2012
Christoph Ortmann provides us with his first-hand experience from the Tolkien Day on Castle Walbeck and finds it to be a colourful blend of informative lectures, entertaining workshops, music, dance, and food which not even bad weather on a Sunday is able to spoil.

What colour does a Dwarf Pony really have?
Carola Oberbeck introduces us to the often overlooked, but nonetheless very important representatives of the animal kingdom, who carried many a dwarf to his adventure. She introduces us to the history of the Icelandic Horses, which most likely posed as the models for the dwarves’ faithful furry companions in The Hobbit and finds that the colour of a Pony’s heart is more important than that of his coat.

Visit in Hobbiton
Rowanfair thinks back on her nostalgic and in some ways melancholic visit to Matamata (commonly known as Hobbiton these days) in September 2007, before the filming area was roused from its “Sleeping Beauty mode” and revitalized with life for the shoot of the Hobbit-Movies.

Harad – the Unknown South Part 2
Andreas Zeilinger continues his quest of shedding more light on the mysterious southern regions of Middle-earth and centers his thoughts on the role which Harad played during the War of the Ring. His conclusion shows that the Haradrim should not wholly be condemned as monsters in the service of Sauron.

A Visit in Rivendell
Claudia Pertschy pays a visit to the “last homely house east of the sea”. Apart from providing us with mouth-watering recipes straight from Elrond’s kitchens, she also looks into the legitimate assumption, that the weather in Imladris could have been magically influenced by its inhabitants.

Miscellaneous
Apart from the contents mentioned above, this issue of Flammifer also contains a calendar of Tolkien-related events, Carola Oberbeck’s report from the annual Brainstorming Weekend in Tabarz alias as the annual meeting of all those, whose ingenious ideas and initiative revolutionize the DTG year in, year out. Furthermore, this issue includes a step-by-step tutorial to making delicious Hobbit-themed cupcakes and even more wonderful artwork by cover artist Marco Schüller and Anke Eißmann.