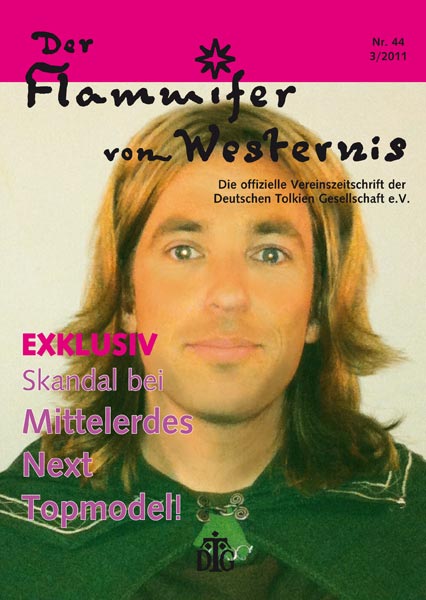 Cover
Middle-earth’s Next Top Model, Merry Brandybuck, features the cover of this issue. It’s one of his many duties after winning the competition at Minas Breuberg.

Tolkien Tag Linker Niederrhein
The 3rd time in a row the Niederrhein smial invited persons interested in Tolkien for a weekend of fun, action and knowledge about and around our favourite author’s world and works.

Tolkien Thing XIII
This year’s AGM took place July 14-17, 2010 at Castle Breuberg. We were joined by the Austrian Tolkien Society as our guest of honour. Carola Oberbeck’s vivid article shows the large variety of workshops, lectures and events.

Regensburg Smial
In our “Smials of the DTG” column the Regensburg smial “Melkor” takes its turn to present itself. This small but nice group meets once a month to discuss not only Tolkien, but also covers many other topics as well.

Reviews
Stephanie Dorer gives a short review on Middle-earth cook books with meals for orcs, elves and of course Hobbits while the games-review concentrates on the new Hobbit game published only recently.

Dúnedain of the North
Andreas Zeilinger focuses on the history of this “forgotten people”, once the most powerful and glorious force in north-western Middleearth.

Ring*Con 2011
Europe’s greatest Fantasy Convention lured fans from all over the world to Bonn. Read Marie-Noelle Biemer’s report on the event as well as an interview with Jonathan Harding.

Miscellaneous
Apart from the things mentioned above, this Flammifer includes a calendar of Tolkien-related events, Tolkien fun and satire, readers’ letters, reports on tolkienstammtisch.de and the meeting of the southern German smials as well as illustrations by Sybille Benedict-Rux, Gudrun Pohlmeyer, and Sylvia Lindner.