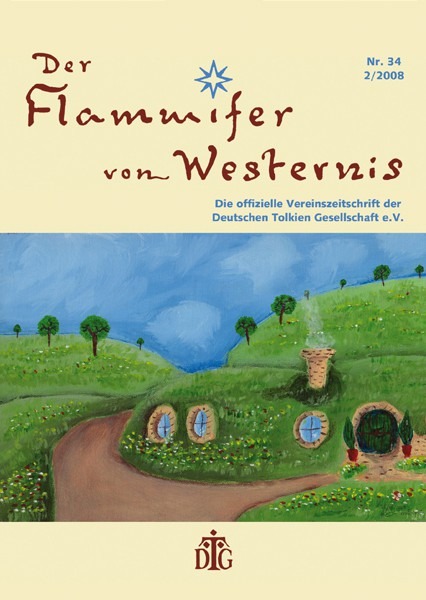 10th anniversary
Though the year 2009 has started as far as the outside world is concerned, this issue of Flammifer is “officially” still set in 2008. Thus we continue with articles on the DTG’s 10th anniversary. Read the second part of the Flammifer chronicle focusing on questions of layout, the input-output-ratio, essay highlights and the (overall positive) reception of the journal.

The next ten years
An article somewhat linked to the anniversary but looking into a brighter future is Chairman Marcel Bülles’ vision for the society and his suggestions for the upcoming decade.

Tolkien Seminar 5
The 5th Tolkien Seminar, a two-day congress under the title of “’In a hole in the ground …’ – The Hobbit or Here We Go Again”, took place in Jena in April 2008. Carola Oberbeck informs us of the lectures held by academics from around the globe. Topics ranged from eucharistic poetics to the comic book adaptation of The Hobbit.

Indonesian Tolkien-Society (“Eorlingas”)
This issue’s contribution to our “Middleearth is everywhere” series takes us far away to the Eorlingas. After the Taiwanese and the Philippine, the Indonesian is the third Tolkien society from an insular state in Asia that we present in the series. Riri Rafiani and Kania Anggraeni tell us of the founding of the society and the activities they organise. The original English version of the text was kindly forwarded by the Dutch Tolkien Society.

Gondor and Rohan
At Tolkien Thing X, Andreas Zeilinger held a talk about the differences in representation of the relationship between Gondor and Rohan in the book and film version of The Lord of the Rings. Now he provided us with the text.

Athelas
An article by Heidi Kemnitz on Aragorn’s development as a healer and the importance of the number three. All supplemented by wonderful Athelas illustrations by Sybille Benedict-Rux, Linda Budinger and Konstanze Faust.

Miscellaneous
Additionally, this issue of Flammifer contains a calendar of Tolkien-related events, Tolkien fun and satire, another article on Codemasters’ “The Lord of the Rings Online” game, as well as illustrations by Anke Eißmann, Timo Fülber, Johanna Görlitz and Claudia Pertschy.