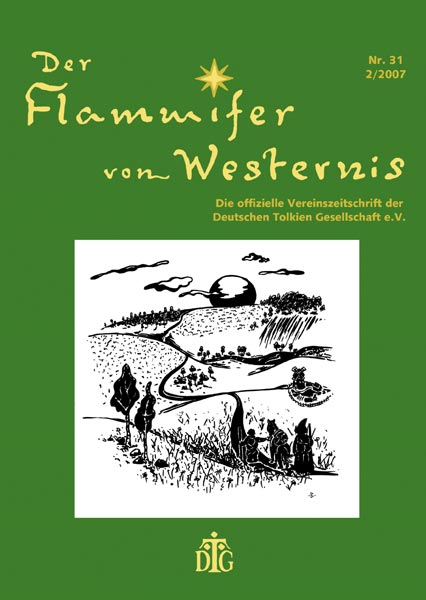 Cover artist
Marilin Rappu The front cover of this issue features the drawing “A journey home” by Estonian artist Marilin Rappu, who also created the illustrations on pages 2, 21, 25, and 26.

Tolkien Tag 24 & 25
Several times a year, the German Tolkien Society (DTG) holds a Tolkien Weekend with lectures, games, and hobbit food in varying places across Germany. The 24th and 25th runnings took place in Berlin in May 2007 (report by David Koch) and in Cologne in September 2007 (report by Kathrin Barth), respectively.

Tolkien Stammtisch
In Flammifer #24 we launched a series on the local groups (“Stammtische”) of the German Tolkien Society. In this issue we introduce the smial of Stuttgart.

Aragorn – rightful heir of Gondor?
Andreas Zeilinger investigates whether or not the claim of Aragorn II to the crown of Gondor was legitimate. To this end, he gives an overview of the history of the kingdoms of Arnor and Gondor.

Mythological humanism?
Jan Giesel briefly examines the concepts of mythology of Thomas Mann and J.R.R. Tolkien as embodied in their respective works Joseph and His Brothers and The Silmarillion/ The Lord of the Rings.