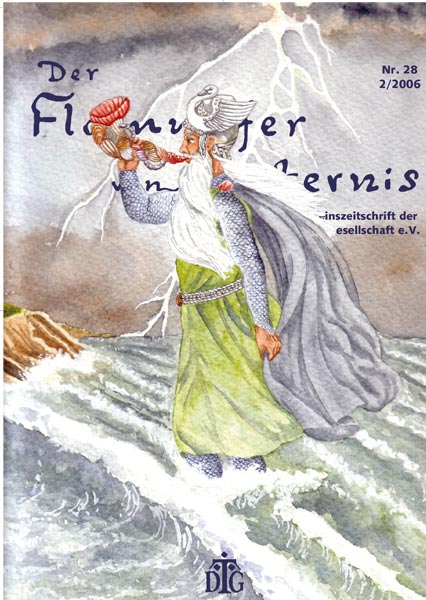 Ring*Con 2006
Betty Finke gives a detailed account of the fifth running of this major LotR convention, which took place in Fulda, Germany in November 2006 and featured lots of actors from the Peter Jackson films as well as lectures and workshops.

Tolkien Stammtisch
“Stammtisch” is a regular gathering of people with a common interest in a pub or café, or literally the table that they gather at. In case of the German Tolkien Society, it is also the term for a local group of Society members (cf. “smial”). Flammifer is going to present all of the DTG’s local groups, the tenth one being Tolkien Stammtisch Frankfurt am Main.

Spanish Tolkien Society
Our series “Middle-earth is everywhere” introduces the DTG’s fellow societies around the world. In this issue, Magalie Peiró Sánchez presents the history and current activities of the Spanish Tolkien Society (STE). In addition to that, Thomas FornetPonse gives an overview of Tolkien research in Spain.

Skies of Middle-earth
Five Tolkien fans from the Bremen Observatory put together a reading of Tolkien texts from the Silmarillion which focus on the stars and planets of Arda. The show entitled “Skies of Middle-earth” combines slides from renowned Tolkien artists, selected music from the soundtrack of the “Lord of the Rings” films and the unusual story-telling of the “modern bards”.

Miscellaneous
Apart from the things mentioned above, this issue of Flammifer contains a calendar of Tolkien-related events, readers’letters, Tolkien fun and satire including the first instalment of our new cartoon series created by Hungarian artist Zsigmond Kostyál, and illustrations by Konstanze Faust and Henning Janssen (including back cover).