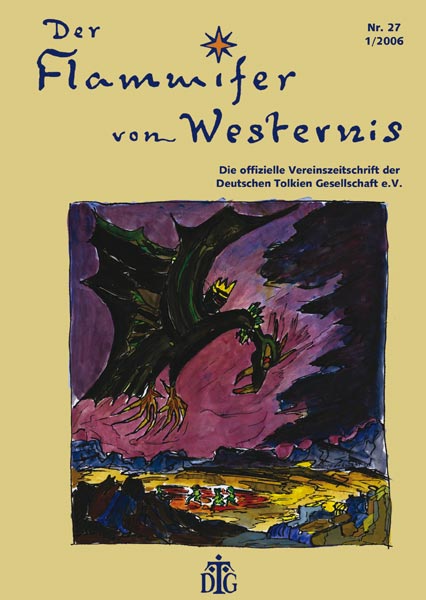 Tolkien Seminar 3
Martin Hopp looks back on the German Tolkien Society’s third Tolkien Seminar, which was about The History of Middle-earth and took place in Mainz in April 2006.

Tolkien Thing VIII
The DTG’s eighth annual meeting was held in July 2006 and featured special guest Alan Lee. Angela Jorrens and Carola Oberbeck give an overview of the lectures and other activities that were offered.

Tolkien Stammtisch
In Flammifer #24 we launched a series on the local groups (“Stammtische”) of the German Tolkien Society. In this issue, the smials of Bielefeld and Essen introduce themselves.

Reviews
This issue of Flammifer contains reviews of the book Wo ist Carlos Montúfar? by Daniel Kehlmann and the CD set “The Lord of the Rings: Complete Songs and Poems” by The Tolkien Ensemble.

Miscellaneous
Apart from the articles listed above, this issue includes Tolkien fun and satire, readers’letters, and illustrations by Claudia Pertschy, Dagmar Jung, Christian Pietzke, Henning Janssen, Silke Molitor, and Julia Pelzer (back cover). In addition to that, we proudly present a reproduction of a drawing that Alan Lee created during his visit to the Tolkien Thing VIII in July 2006.