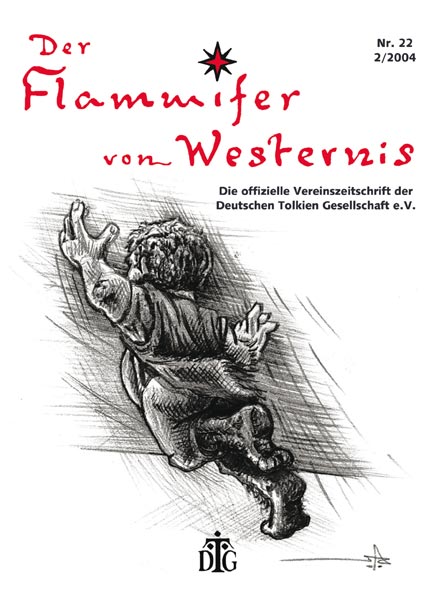 Tolkien Tag 17
Twice a year, the DTG organizes a Tolkien weekend with lectures, games, and hobbit food in varying places across Germany. Steffi Dorer and Heidi Krüger give an account of the spring 2004 Tolkien Tag,which took place in Hamburg.

Tolkien Thing VI
The Thing is the DTG’s annual meeting, and in July 2004 it was held for the sixth time. DTG board member Carola Oberbeck was there and gives an overview of the lectures and other activities which were offered.

Archivist
DTG Archivist Ulf Schönherz introduces himself and his plans for the newly-created position which he fills.

Collectors’ Meeting
June 2004 saw the first official meeting of Tolkien book collectors in Germany. The meeting was a success and is intended to become a regular event. Carola Oberbeck and Susanne Pösl joined the happy throng of collectors.

RingCon 2004
The third running of this major LotR convention featured lots of actors from the films but also lectures and workshops. A short account is given by Mark Craemer.

Belgian Tolkien Society (“Elanor”)
For the fifth instalment of our series on the world’s Tolkien Societies,we look to Belgium. David Baetens, president of “Elanor”, tells us about his Society’s manifold activities.

Middle-earthlings today
Ine Schmale takes a half-ironic look at the inhabitants of Middle-earth and their descendants from today’s point of view.

Tolkien and racism
Are there any racist tendencies in Tolkien’s works? Andrea Heger gives a report on Friedhelm Schneidewind’s lecture on this often-discussed question.

Reviews
This issue of Flammifer contains reviews of National Geographic’s DVDs dealing with the movie trilogy and two LotR-related articles in German popular science magazine P.M. History. Apart from that, the Flammifer itself became the subject of a review when it was scrutinized in the Dutch Tolkien Society’s magazine Lembas. Thank god,we passed.

Miscellaneous
In addition to the articles mentioned above, this issue contains Tolkien fun and satire, a crossword puzzle, readers’ letters, and many illustrations.