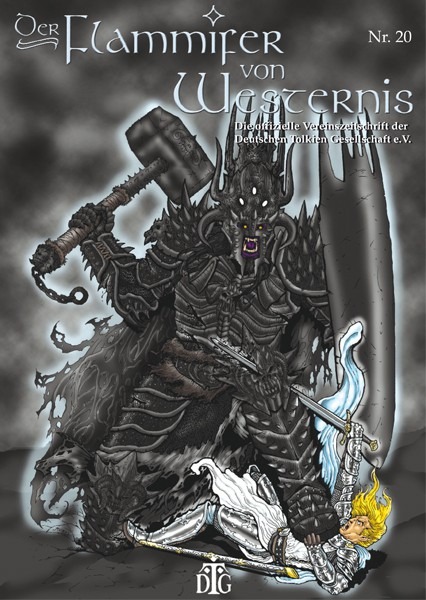 Cover artist: Yannis Roumboulias
This issue’s cover features the Greek artist’s drawing “The Fall of the High King” depicting the fight of Morgoth and Fingolfin. Moreover, Yannis Roumboulias tells us a little about himself and his inspiration.

Tolkien Seminar
April 2004 sees the premiere of a planned regular series of congresses organized by the German Tolkien Society. Under the “brand” name of “Tolkien Seminar”, several highranking experts on the matter are going to discuss a variety of Tolkien-related questions among each other and with the audience.

Meriadoc Brandybuck
Mark Rein shows that Merry is a rather underestimated character in The Lord of the Rings and tries to set the record straight.

Reviews of rivalling Elvish grammars
Two reviews weigh the merits and demerits of two combined grammars/dictionaries of Elvish, which were published in Germany shortly after one another. The books’ authors, well-known Tolkien scholars Helmut W. Pesch and Wolfgang Krege, have dealt very differently with the problems posed by the material.

Other reviews
This issue includes another four reviews, which deal with a book on the good and evil in LotR and Harry Potter, a fantasy dictionary, an anthology of fantasy stories written in honour of J.R.R. Tolkien, and an Xbox LotR game.

Miscellaneous
In addition to the articles mentioned above, this issue of Flammifer also contains a calendar of Tolkien-related events, a Tolkien test, humorous stuff, readers’ letters, photographs, and illustrations by Jamie Chang, Matthew A. Wells, Ine Schmale, and Kathryn Whiteford.